In his fourth final in Paris, Novak Djokovic, undisputed number one in the world, won Roland Garros tournament beating Andy Murray 3-6 6-1 6-2 6-4. The Serbian thus becomes the eighth man, who has won the four Grand Slam titles, after Don Budge, Fred Perry, Rod Laver, Roy Emerson, Andre Agassi, Roger Federer and Rafael Nadal, and he comes in for his own right in the Olympus of the tennis giants. Most single GS titles

With this victory, the Serbian raises to 12 the number of Grand Slam titles, catching up with Roy Emerson and undoing the tie he had with Rod Laver and Bjorn Borg. Only Pete Sampras, Rafael Nadal and Roger Federer are ahead of the current number one in the world in Grand Slam titles. Djokovic also reached 20 Grand Slam finals, tying with Nadal and seven finals away from Federer. Between the three they have played 67 Grand Slam finals. Impressive is the fact that the three players with more Grand Slam finals in the nearly 140 years of the tennis competition history are contemporary and active players. Most GS titles Most GS finals

The final, with profound historical significance, did not have, however, the expected tennis level brightness. Murray, after a great first set, collapsed, crashing down, he began to accumulate mistakes – many more than the 39 pointed by the organization – and he could not pose difficulties to Djokovic who, in a pleasant way and free of pressure at any time, won the second and third set and he was winning 5-2 in the fourth. Only then, on the eve of the defeat, seemed to wake up Murray and we could see the most competitive games. The Scot could break Novak´s service in the eighth game and save his service in the ninth. With 5-4 and Djokovic serving, Murray saved two match balls and took the game to deuce, but he was able to beat back just until there. In the last point, a hard long rally, Murray crashed his backhand in the net and Djokovic was finally able to join the club of the elect.

Djokovic gets his 28th consecutive victory in Grand Slam tournaments, beating the two Federer’s marks of 27, and he stays just one victory away of the Era Open record hold by Rod Laver with 29 victories, achieved between Australian Open 1969 and Wimbledon 1970. Ahead are Don Budge´s mark of 37 consecutive wins, achieved between Wimbledon 1937 and US Open 1938, and the absolute record of Bill Tilden with 57 consecutive victories in Grand Slams (including his victory of 1921 at World Hard Court ch.), since Wimbledon 1920 until his defeat against Henri Cochet in the US Open of 1926. Six years unbeaten at Grand Slam. Wins streak GS Open Era Wins GS streak all time

The number one in the world keeps being intractable. The balance in the season stands at 44-3, Roland Garros is the sixth title he raises this season, bringing the count to 65, only four away from Nadal, and his balance facing top-10 in the last two seasons stands at 46-6. The Serbian is sweeping all records. Most titles Open Era

The tournament was influenced – in addition to the presence of rain that tortured players, public and organizers – by the loss of Rafael Nadal before his match of third round against Marcel Granollers. A renounce that took everyone by surprise since the Balearic had hidden by conscience the problems on his left wrist, an injury he could not finally get over. Nadal finished unbeaten for tenth time in the tournament, but this time in a very different way from the previous ones. A new problem in Rafa´s career, just when he was recovering his best feelings, and forced him to a new break that may compromise even his participation at Wimbledon.

The main beneficiary of Nadal´s loss was the Austrian Dominic Thiem, who faced Granollers in the fourth round, instead of seeing the faces, as planned and with the permission of Marcel, with the nine times champion. The Austrian took his opportunity and went through the semi-final, after beating the Belgian David Goffin at quarter-finals, to lose in three sets against Djokovic. Great result for this young Austrian man who will appear next Monday on the ATP list as number 7 in the world. Thiem is confirming expectations at full speed. We’ll see how he manages from now on, his status as top.

Stan Wawrinka defended worthily the title achieved last year. After a difficult first round with Lukas Rosol, who was ahead 2-1, the Swiss kept moving steadily forward by the tournament until Murray stopped him, not without struggle, at semifinals.

The biggest surprise of the tournament was, without any doubt, Albert Ramos-Vinolas who after winning in third round to Jack Sock, he surprised Milos Raonic in eighth finals to sneak into quarters for first time in his career in a Grand Slam tournament. Albert had lost in the first round the four previous years. His victory against the Canadian is the second one achieved by the Catalan facing top-10. The previous was with Federer at Shanghai Masters 2015. Few victories, but exclusive.

Richard Gasquet, who played the quarterfinals of the tournament for first time defeating Kei Nishikori, was another who has signed a great performance, in addition to leave an excellent impression of his tennis. Tomas Berdych showed his consistency and reached again the quarter finals – is the 14th time he does it in a Grand Slam tournament – after beating easily to David Ferrer who is a little down on his luck. David Goffin confirmed his excellent form and he also played the third from last round to follow his ascension on the ATP ranking.

The tournament stats -among the players who reached at least the fourth round- were led by John Isner at service (highest number of aces and best percentage of total points won) and by Djokovic as returner. The number one got 48,62% of total return points won and he scored 47 breaks to his rivals in 103 return games played, a fantastic 45.63%. The Serbian disposed of 100 break points, almost one per game.

The great clay season is closed with the crowning of the new King on clay -who is by the way the tennis world king- to make way for the most pedigree surface, the grass. Wimbledon, the oldest and most prestigious tournament in the world, will begin within three weeks. Let us hope that Federer and Nadal are able to compete and fight against the supremacy of the Serbian. It would be good to see again the big-four in full on the grass of London. 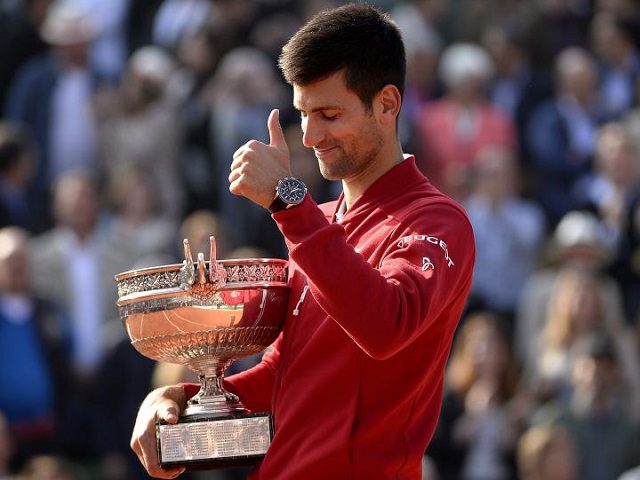