The TTB Editorial
by TTB Team

As every year, spring announces the European major tournaments on clay: a Grand Slam, Roland Garros, three Masters 1000, Monte Carlo, Madrid and Rome, and an ATP 500 with a long history, Conde de Godó in Barcelona. A good number of ATP 250 (Houston, Marrakech, Bucharest, Estoril, Istanbul, Munich, Geneva and Nice) join them, completing two months in the tennis calendar devoted almost exclusively to that specific clay-court tennis, based on build the point little by little, moving the rival until you find the point.

Many of these tournaments are real monuments in the history of tennis. Monte Carlo takes place since 1897 and this year will be the edition number 109. The magical atmosphere of the Country Club – a place of obliged pilgrimage for any tennis fan – still retains the essence of its long history; to observe the pictures of Suzanne Lenglen, Henri Cochet or Bill Tilden decorating the main hall of the restaurant is a real experience of time travel. Monte Carlo book of records

With so much history behind it would be tedious to remember all the great champions who triumphed on the European clay courts. From the Doherty brothers to Novak Djokovic almost all world numbers one in history were victorious at least once in these big tournaments. However, when clay is mentioned, the name of Rafael Nadal sticks out above all in the 140 years of competitive history of this sport.

Nadal´s numbers in the period 2005-2014 are so overwhelming that do not allow any comparison. 10 seasons of unquestionable dominance in which he barely left the crumbs to his rivals in the months of April and May. Roland Garros, 10 entries, 9 titles; 66 victories and just one defeat. Monte Carlo, 10 entries, 8 consecutive titles from 2005 to 2012; 48 victories, 2 defeats. From 2007 to 2012, Nadal only lost 2 sets in his career in the Principality. In 2010 he stormed to the title by losing just 14 games, something unusual in the history of Masters 1000.

In Rome, also 10 entries, 7 titles, 45 victories and three defeats. In Madrid, regarding the editions played on clay since 2009, 6 entries, 3 titles, and 22-3 balance. The Conde de Godo has seen Nadal biting 8 times the Champions Cup and 41 times go to the net to greet his defeated rival. He only lost once in the reporting period, against Almagro in the quarterfinals of the 2014 edition. Finally, in Hamburg, 2 entries, one title, one final, 9 victories and one defeat.Nadal advanced stats clay 2005-2014

The prodigious decade of Rafael Nadal is summarized up in this: 7 seasons wrapping up with 4 of the 5 possible titles, 36 tournaments won in 47 entries, 63-7 against top-10, with balance of 13-2, 13-4 and 6-0 against Federer, Djokovic and Murray respectively. The global balance is 231 victories and 11 defeats, to 95.45% efficiency, an even higher performance presented by Djokovic since 2015, 94%.

If we extrapolate the performance of the Balearic on clay, beyond the classic spring tournaments, we find other equally prodigious numbers. For example, he has the highest winning streak on clay during the open era, with 81 wins, the best series of consecutive titles, 13, from Monte Carlo 2005 to the Italian Internationals 2007 and the best titles/entries ratio, 58,75%, 47 titles of 80 possible. Speechless. Wins streak on clay Titles streak on clay

None of the other great champions on clay may present comparable numbers to those of Nadal´s ones. Guillermo Vilas is still who has more ATP victories and titles on clay – 681 and 49 respectively-, but his percentage is considerably lower, 79,84% against 91,58% of the total of Nadal’s career. Indeed, no other player of the open era has been able to cross the threshold of 90% victories in a specific surface. Most ATP titles on clay Most ATP wins on clay

In addition, at the time of Vilas it was possible to build a whole season playing almost exclusively on clay; in 1977, his best season, the legendary Argentine played 101 of the 148 total matches on clay. Vilas won in Roland Garros, Rome, Monte Carlo and Hamburg, but he could not do it in Barcelona, where he lost at the final in four consecutive times, from 1980 to 1983, while in those years the tournament was played in October. Vilas 1977 activity

Bjorn Borg also has an flawless curriculum in the European spring. Six titles at Roland Garros in eight entries; as Nadal, he only lost twice in the Parisian Grand Slam, both facing Adriano Panatta, in 1973 and 1976. He won three times in the Principality (1977, 1979 and 1980), two at the Foro Italico (1974 and 1978) and two others, 1975 and 1977, at the Real Club Tennis of Barcelona. The Swede, who always competed in a very particular calendar, replete of exhibits, only played in Hamburg in 1979 where, after winning a couple of matches, he retired in the round of 16 against Eliot Teltscher. Borg clay tournaments results

The Swede has the second best winning percentage mark on clay, 85,89% and his ratio of titles/entries, 41.10% with 30 titles of 73 possible. He is also second in consecutive titles on this surface, 10, from Roland Garros 1979 to Geneva 1981. Nadal precedes him in all these classifications. ATP wins on clay highest % Best titles/entries ratio clay

The only player who, like Nadal, was able to complete the five victories in the European classics is Ivan Lendl. The Czech, third in the ATP rankings in titles/entries ratio on clay, repeated in all of them – at Roland Garros he even reached a third victory — to complete a magnificent track records of eleven titles. Lendl, a complete player that dominated all surfaces, also starred in one of the most memorable finals of the French Open when he came from two sets down against John McEnroe in 1984 , a match that remains in the memory of all those who saw it. Lendl career match record

Many other great champions triumphed on the European clay courts: Drobny, Pietrangelli, Gimeno, Nastase, Orantes, Wilander, Muster, Moya, Ferrero and Kuerten won four of the five European classics. Santana came close to won them all, but he lost the finals of Hamburg and Rome, the same thing happened to Patty in Monte Carlo and Barcelona. Froitzheim, Cochet, Lacoste, Von Cramm, Asboth, Rosewall and Laver were also fantastic players on clay, but for various reasons they played less editions.

As it regards the Americans, only eight of them have been able to succeed at Roland Garros (Agassi, Courier, Chang, Trabert, Patty, Parker, McNeill and Budge), and apart from Budge Patty, born in Arkansas but practically assimilated as French, they have only another true specialist on clay. Frank Parker hardly played in Europe, but he left his mark by winning the two editions of Roland Garros in which he participated, in 1948 and 1949, making him the only unbeaten more than once champion at Paris Grand Slam. He also won the Monte Carlo title in his only entry at the Country Club in 1949. His 49 titles and 367 victories on clay says it all and although 177 of them were against players over the top-50, his percentage of victories 91,98% and 60,49% of titles/entries ratio places him as one of the great specialists of all time. All time wins on clay highest %

It is time for clay. Some say that tennis on clay is a different sport from that practiced on fast surfaces. So are the environment and the public, with different tastes and habits. It is a remarkable contrast with the recent tournaments in Indian Wells and Miami. And it is true that also in tennis, as everything, variety is enriching. 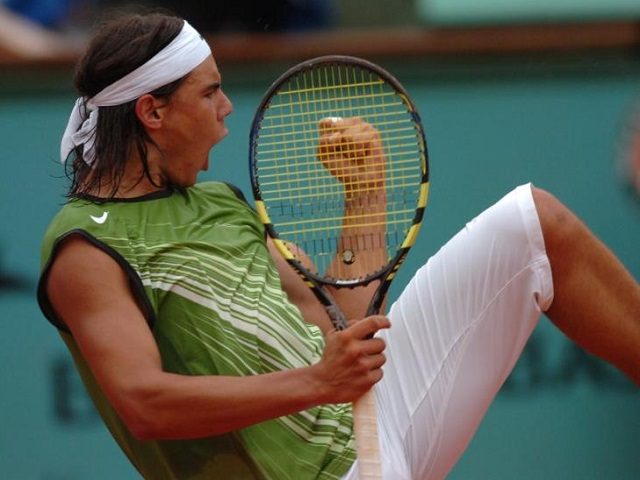