I am looking an interesting moment in world tennis, especially in the last two years. Among men, there is a bad guy who comes back with everything to try to take advantage of those who begin to falter in the group of top players. Those below, the ones who play better, they are all on fire and more focus against the top. They are attentive to a bad day or a bad streak. I think we will see several new players who will be added this year. It is attractive to observe that one or another may become unstuck when confront with heroic actions that generate those arriving. They are not used to that opposition and they must make tough changes: there is no time to lose and even can generate problems with their coaches in the process, for the highest demands. For someone supposed bad luck and they even change their way of getting angry when they go wrong.

This causes that the public, increasingly demanding because it is now a specialist in this sport, see strange things. The public asks each time a little bit more to his favourite players, and the same applies for the press, the leaders, and the companies that sponsor them. The tennis player is only one and must adapt. Our sport is individual and we cannot change by other if we are wrong. Even so, I see that several players are nervous by such exposure but they have developed new systems to wiggle out of the trouble. They look less at coach, more concentrate on their rackets and they are not so dependent on the external.

Among women – I saw quite women’s tennis last year – it is noted that they improved in quantity and quality. They soothing because the results are closer, and that led them to cheer up. They are more prepared to compete, firmer, as they see titles are very competed beyond the Grand Slam in which dominates Serena Williams. The fact that she did not reach to win the four major tournaments in the year allowed the following players in the ranking acquire more power.

It will be important to follow closely the season because there will be changes. We’ll see how. In fact, it is not unlike what happened historically: while we had a “cushion” of results and we were not worry about the players below us, we always had to be alert because none was “bad”.

The good times are three tennis players, and the less good, two. If we have the 1 and the 2 winning it all, it does not suggest an outstanding generation. There must be three to form a single duel, and it doesn’t matter if a fourth is far. If there are three, the energy is enormous. If I have to talk about what I lived, appeared Borg, Connors and me, we surpassed the previous ones. McEnroe arrived a little later to engage with Lendl, with itinerant presence of Wilander, Becker and Edberg. Then Sampras-Agassi, but Sampras dominated six years in a row the world tennis. They were followed by Hewitt and Roddick until the emergence of Federer, who was practically undisputed leader four or five seasons until Nadal showed up and they generated another great rivalry. Djokovic was installed to fight with Nadal, as a generational matter. But we must recognize that the Swiss, for his quality, resumed after a downturn and he accompanied them for a long time on very high level. This is confirmed by the number of clashes between them, which is very high, and they formed a crazy trio in the finals of Grand Slam nearly ten years in a row.

The period of time of three super tennis players together it is always good to happen, because they keep the attraction of this sport. Between Borg, Connors and me, we won 75% of the tournaments since the mid-1970s and we came from three different countries. Prior to the professionalism, the domain was more individual: Hoad, Cooper, Fraser, Laver, Emerson, Newcombe… all Australians!

Each new generation of champions is finding a way to play the new that emerge, those who pretend to remove them the domain. Borg and I worked hard on the effects to beat the positional players, those who attack you at any window of opportunity. We managed to pass them when they came to the net. Over the years prospered the players who hit with more power and speed, such as Clerc, Becker, Lendl; even Edberg in different style, more agrgessive than stronger… Most of them start to dominate with big serves and great physical power and they left behind, for example, the traditional Swedish playing from the baseline. On the other hand, returning the retrievers, the service lost efficiency. The elements helped, logically, because evolution is vital. I cannot imagine the disaster that Roscoe Tanner would do with his serve and modern rackets…

Having rivals as Connors and Borg led me to be a better tennis player, I have no doubt. More than anything, because I had to be always aware of their evolution, see what they changed technically in the next game and work hard in training to return to face them. I watched them against other adversaries to learn as much as possible from them, so I did it all my life. Not to copy them, but to see how they react to certain circumstances and remember it in the next match. It became a constant learning, because we evolved our game very often. At the beginning I saw them as two lions in a great jungle, and understandably, afraid to fall into their clutches: if I wanted to get into that jungle I should have, at a minimum, a similar level to not be an easy victim. I strove to keep up and, thanks to the competition that was generated, I evolved. We understood that, in a way, we needed each other: we should decipher the game of the other and find a way to break it. 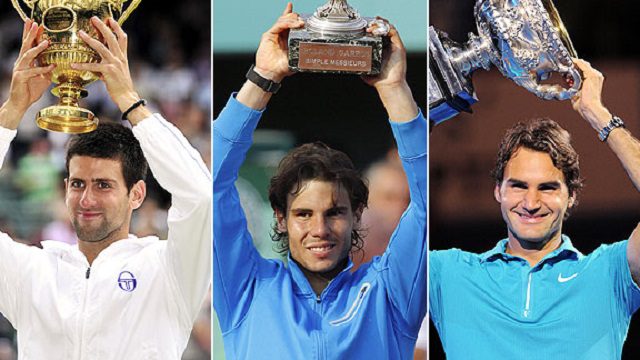