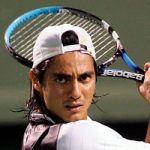 Latin America is very demanding with his players. It is the birthplace of great champions in the history, and it is now going through difficult times.  With the injury of Argentine Juan Martín del Potro we are left without representatives in the final rounds of major tournaments and without top ten in the last three years, except the same Juan Martin. That’s the current situation.

It is difficult to understand that Brazil, after Guga Kuerten and Fernando Meligeni (Guga, one of the largest sports idols in that country), does not have more players in the elite of world tennis.  Thomaz Bellucci is the only one who has got to bat for it.  And Brazil cannot say as the rest of Latin American countries that they have not had financial support, both public and private company.

Argentina is still the country that has more players in the Top 100. Good level players are constantly showing up, the problem is that after the era of Guillermo Vilas and José Luis Clerc; ‘Luli’ Mancini, Martin Jaite and Guillermo Pérez-Roldán;  David Nalbandian, Guillermo Coria, Gaston Gaudio and CIA., the bar is set very high, and the fans and the press are not satisfied.

The Chilean trident RGM, with the unique talent of Marcelo Ríos, ex-number one in the world, with Fernando González and Nicolás Massu, they have left a very difficult task for the future of the Chilean tennis.

In the rest of the countries it happens something similar, excepting Colombia where in recent years they have had financial support and they has shown with the results of their players. The biggest problem is tennis is a very expensive sport and the guys, when they are 16 or 17 years old if they don’t have money to travel as they should they sign up for a college scholarship that assures them their future.

In the case of my country, Ecuador, where I grew up watching play my idol Andrés Gómez, and I was fortunate to be able to share with him unforgettable moments both inside and outside the court, history repeats itself, in spite of the last 5 years the Government, through the Ministry of Sport, has begun to support some players.

There are kids with talent, there are professionals who know how to teach to play tennis, but it is still the personal effort of parents who bring up their children what moves the tennis.  There is no basis, there is not a system, there is not a hotbed. Or maybe the boys have no hunger or need to become great champions. In this, Argentina is always the exception!

Tennis is playing faster. Technology continues advancing.  Players are more careful with the diet. There is more injury prevention which is allowing tennis players to play more years.

Our players must have patience, be persistent, keep working and sacrificing. Today, if you are 24 years old and you are not “in”, you still can “reach it” at 28.

But, more support from the public and private sector is needed it! Our geography does not allow us to travel by car or train from one country to another, the distances are very large.  And actually to improve from the juvenile stage you have to travel to Europe.

I want to finish my first blog congratulating Marcelo Melo, who finished number one in the world in doubles in 2015! GRANDE GAROTO! You are hot and you are cold (Kate Perry song! Marcelo will understand).