Swiss player Stan Wawrinka clinched his third title of Grand Slam beating Djokovic, number one in the world, at US Open final 6-7 (1) 6-4 7-5 6-3 after 3 hours and 54 minutes in an intense and exciting match in which Djokovic felt again the devastating power of Wawrinka when he plays in his best.

There is no doubt that Wawrinka, a player who often provides a sort of indolence figure, turns into a fearsome player when he plays big matches, able to keep the concentration at all time, a rock when he defends and determining when he has the chance to attack. His numbers are eloquent in this regard. Since 2014, the Swiss has a balance at Grand Slam´s tournaments of 50 wins and 9 losses (84,75%), almost 20 points more efficiently than in the rest of tournaments where, in the same period, he accumulated 78 wins and 37 losses, a 67,83% of effectiveness.

In order to give value to the performance of Wawrinka at Grand Slam´s tournaments there is nothing more to compare his numbers with those of others leaders in the circuit. Nadal, in the last three seasons, holds a 80% of victories (32-8), Federer 82,46% (47-10) and even Murray is below the percentage of the brand new winner of US Open, 59 victories and 11 defeats (84,29%). Only Djokovic with a 92,11% (70-6) holds better numbers than Swiss player.

And if Grand Slams are Wawrinka´s territory, finals are no less so. With yesterday´s final, he is on a streak of 11 consecutive victories at finals. Since Chennai 2014 he does not know what is losing a match by the title, and that it he has played of all kinds -three Grand Slam, a Masters 1000, three ATP 500 and four ATP 250- and facing real big opponents as Nadal, Federer, Djokovic (two times), Cilic or Berdych. In this section he also has overcome to Djokovic, who has a record of 10 consecutive finals won (from US Open 2015 to Madrid this same year) although still he is far away from Nadal, 14 (from Monte Carlo 2005 to Roland Garros 2006) and Federer, 24 (from Vienna 2003 to Bangkok 2005).

At his 31 years, 5 months and 14 days, Wawrinka become the second oldest player winner of the US Open in open era, after Ken Rosewall who got won in 1970 with 35 years. Previously, William Larned and Bill Tilden won it with 38 and 37 years respectively. Since 1968 only Rosewall – 37 years old when he won the Australian Open in 1972 – Andrés Gimeno, Andre Agassi and Arthur Ashe achieved Grand Slam titles being older than Stan.

Wawrinka is also the first player who wins his three first Grand Slams in different tournaments since Agassi won the Australian Open in 1995 after his wins in Wimbledon 1992 and US Open 1994. Agassi completed in 1999 his career Grand Slam after clinching his fourth “major” precisely at Roland Garros, the only title that was missing.

Many figures and records for number three in the world that could have been smoke if Britain’s Daniel Evans had taken advantage of the match point he disposed in third round. Wawrinka saved it with a second serve´s ace and he took the road to title. It is the ninth time this year that a player wins a title after saving a match point. Bautista-Agut (Auckland), Troicki (Sydney), Klizan (Rotterdam), Thiem (Buenos Aires and Stuttgart), Schwartzmann (Istanbul), Karlovic (Newport) and Monfils (Washington) also divert the threat and they ended winning the trophy.

Number one in the world had to settle this time with being finalist. It is been his 21st Grand Slam final, surpassing 20´s Nadal, six behind of the absolute record holder of all time in this classification, Swiss Roger Federer, who has 27 in his entire career. Djokovic is, at the moment, with 12 titles and a 57.14% of effectiveness on finals, away from the records of Sampras, Nadal, Laver, McEnroe or Federer, and even far from his own records in others tournaments as Masters 1000, where he has 30 titles in 43 finals, almost a 70%, or at ATP Finals where he has 5 titles and he is still unbeaten at finals.

Most GS Finals all time

Djokovic´s season stays with 56 wins, 6 losses and 7 titles and is going to be very complicated for him emulate the balance of 82-6 with 11 titles he got last year. With all that, and in despite of the disappointments he has suffered in recent months, his season must be described as spectacular, with the number one virtually guaranteed- is ahead with 2055 points of difference to Murray in the ATP Race – and having become the eighth player in history to complete the four Grand Slam tournaments.

In New York also noteworthy were Gael Monfils, who reached at semi-finals without losing a single set and then he delight us with novel “tactics” in his match with Djokovic, and Kei Nishikori who grinded down Andy Murray at quarter-finals. Del Potro confirmed that his physical problems are totally overcome and he went through quarter finals without losing a single set.

Worth mentioning are Lucas Pouille and Daniel Evans, protagonists of an impressive progress this season. The French of 22 years, who began the season as world number 78, has just gained his status as top-20, he has appeared in the position 18 this week, after performing a sensational tournament including a great victory against Nadal on second round. Pouille repeats quarter finals he got in Wimbledon some months ago and confirms he is one of those players with more future in the circuit. The French player only needs to win his first title ATP to wrap up his magnificent season.

In a lower level, it is necessary to point out British Daniel Evans who has emerged this week as world number 53, rising 11 positions this week. Evans, 26 years old, started this year as 186 in the world and he has already climbed 133 positions. British has played with great success the challenger circuit -three titles and two finals in the season- and he has adapted perfectly to the ATP circuit, where is getting excellent results. In New York he defeated to Alexander Zverev on second round and coming close to springing a surprise in his match against Wawrinka.

The other side of the coin were Raonic, eliminated on second round by Harrison, Thiem, who seems to be a bit exhausted after a season in which he already accumulates 69 matches, and Nadal who has not been able to advance through to a Grand Slam´s quarter final since Roland Garros 2015, and already five consecutive tournaments falling eliminated before that round. Although the sensations that Nadal left before his match with Pouille were excellent, winning all sets and losing just 20 games in three matches.

The gunboat of the tournament was the Croatian Ivo Karlovic, with 120 aces in four matches, 61 of them in his first match with Yen-Hsun Lu, absolute record of aces in a match in the history of the tournament since statistics are collected. The Croatian was also the best at service, winning 72,78% of total points played and a 95% of games played, receiving just 4 breaks. At serve return dominated Nadal (46,87% of total points won), Murray (46,45%) and Djokovic (46,19%). The champion got very good statistics (67,39% at service and 38.81% at serve return) highlighting the 77,46% of break points saved (just behind Karlovic), an excellent percentage he asserted on the final in which he only lost three games at service saving 14 breaks points.

Us Open concludes, and with it all Grand Slam this season, with a new champion, seventh in active, joining to Federer, Nadal, Djokovic, Del Potro, Murray and Cilic. Curious data given that the other three Slam only have four champions. Wawrinka, with his third Slam in three seasons, shows that while he is not a media star as others, when he is at 100% physical and mental is a player as dangerous as anybody else. Djokovic can attest to this. 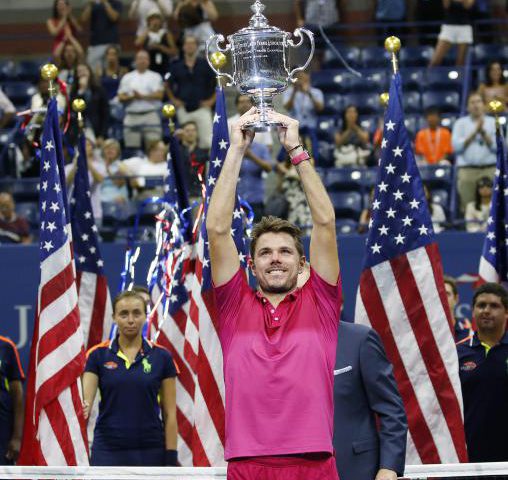