A day after 18 seeds fell by the wayside at Wimbledon, Stan Wawrinka was under no illusions about why he joined the list on Friday — he had fallen victim to a serious bout of “hesitation”.

The world number four became the highest men’s seed to exit the grasscourt major after he failed to execute his gameplan against 165th-ranked Juan Martin del Potro, who is on the comeback trail after undergoing three wrist operations.”When I wanted to play aggressive, I was still hesitating a little bit,” twice grand slam champion Wawrinka said after being beaten 3-6 6-3 7-6(2) 6-3 by the Argentine.”I was a little bit slow to go to the net. When I wanted to put the ball in, I wasn’t clear with what I was doing.”I started to think a little bit too much what to do. That’s make the whole difference”If you start to hesitate with your game, if you start to not go completely with your plan, then it’s tough to play your best tennis.”

The battle between the two grand slam champions, one of 16 second-round matches to spill into Day Five of the rain-ravaged tournament, provided plenty of drama and intrigue but in the end it was Del Potro’s heart-warming comeback that had everyone cheering.”It’s great for tennis to see him back. He’s a great guy, he’s amazing player on the court. He’s a big champion,” said Wawrinka, who suffered his fourth defeat in six meetings against the 2009 U.S. Open champion.”He was so unlucky with all the injury he had for many years.”That unlucky break meant Del Potro had not played at Wimbledon since falling to Novak Djokovic in a thrilling five- setter in the 2013 semi-finals.

Having not experienced any grand slam action since the 2014 Australian Open, Del Potro will now have to see how his wrist holds up as the wretched weather in London has condemned him to playing best-of-five-set matches on successive days.”He’s coming back… I don’t know how he’s going to feel after playing almost three hours … on Centre (today), really physical, mentally also,” Wawrinka said.”You have to see how he is going to recover from that.”When you don’t play those big matches for few years, it’s tough to play back-to-back after that. So I hope he can recover and be ready for the next one.”No matter what French 32nd seed Lucas Pouille throws at him, Del Potro will be ready.”I don’t know if I will be tired or not because I just finished my biggest match after my comeback,” said the 27-year-old from Tandil.”But I will be ready for that challenge.” 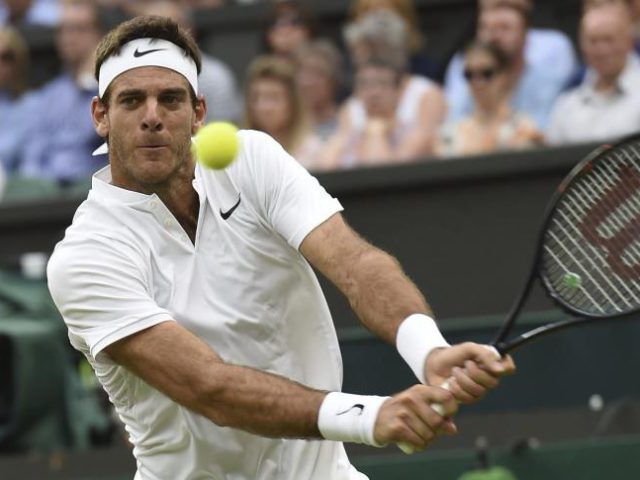