Former US Open champion Marin Cilic kept Croatia alive in their Davis Cup World Group quarter-final tie against the United States on Sunday with a three-set win over John Isner.

That set the stage for a decisive duel between American Jack Sock and Croatian Borna Coric.

The United States, whose 32 Davis Cup titles are the most of any country, were ousted in the first round each of the past two seasons and are seeking to reach the semi-finals for the first time since 2012.

The winners of the tie will face France, 3-1 winners over the Czech Republic in Prague.

“We knew it was going to be extremely tough,” Cilic said of Croatia’s chances of rebounding after dropping both opening singles.

“It’s very challenging to go 2-0 down against the United States, especially with the Bryans, but we believed that if we played well and we continued to fight we might get some chances.

“Hopefully Borna is going to play another good match.”

Cilic withstood 17 aces from Isner, firing 13 of his own and closing it out after two hours and seven minutes with a forehand winner.

Cilic had seized the opening set despite a formidable serving display from Isner, who fought off three set points in the tiebreaker and had one himself before the Croatian put it away.

Cilic’s first chance to seal it came on his own serve in the tiebreaker, but he belted a forehand into the net to let Isner level the tiebreaker at 6-6.

He finally secured the set on Isner’s serve, when the American sent a backhand spinning long from the baseline.

“Mentally it was definitely extremely tough,” Cilic said of the opening set.

“John was playing great tennis in that first set, I was having a lot of troubles with my service game and I was not winning almost any points on his service game. Up to the tiebreaker, he was the much better player.

“But I was there mentally, I was fighting every point. I felt the first set was the deciding one today.”

Cilic was able to ramp up the pressure on Isner’s serve in the second set. The American managed to dig out of a 0-40 hole to hold in the fourth game, but Cilic notched the first service break of the contest to go up 5-3 and confidently served it out for a two-sets-to-love lead.

And this time he was able to make it stand up — unlike on Friday against Sock and at Wimbledon, where he suffered a demoralizing five-set loss to Roger Federer in the quarter-finals. 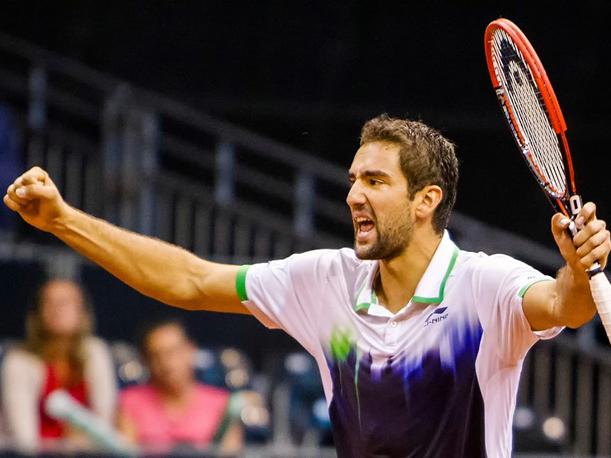