Local hero Richard Gasquet reached the quarter-finals of his home slam for the first time when he downed Japanese fifth seed Kei Nishikori 6-4 6-2 4-6 6-2 at the French Open on Sunday.

On a damp, gloomy day, the 29-year-old outpaced Nishikori to move into the last eight of a grand slam for only the fifth time, setting up an encounter with world number two Andy Murray.

Nishikori had won their last two meetings in straight sets on clay in Rome and Madrid this year but that counted for nothing on Sunday as Gasquet sprayed Court Philippe Chatrier with backhand winners.

The last French player in the draw, Gasquet broke first to lead 2-1, but Nishikori found his groove and stole the ninth seed’s serve twice to move 4-2 up when play was interrupted by rain.

Upon resumption, Gasquet broke back by using his superb single-handed backhand to devastating effect, looking determined to finally reach the last eight at Roland Garros at his 13th attempt.

“I was fired up at the restart, I knew I had to match his tempo if I did not want to lose in three sets,” Gasquet said on court.

He won six games in a row to open up a 2-0 lead in the second set, making very few unforced errors. A jaw-dropping backhand winner down the line earned him another break and a 4-1 lead.

He bagged the set with yet another backhand winner, roared on by the crowd and his coach Sergi Bruguera, a double French Open champion.

“Sergi talks a lot — he actually got (me) another code violation today. He pushed me,” Gasquet said referring to the warning he received for on-court coaching.

Nishikori saw off a break point in the third game of the third set and started to play tighter. He set up two set points on Gasquet’s serve in the 10th game and converted the second when the Frenchman netted a volley.

Gasquet, however, regained his composure to break Nishikori in the first game of the fourth set with a forehand winner.Another break gave him a 4-1 lead and he rounded it off on his first match point by holding to love 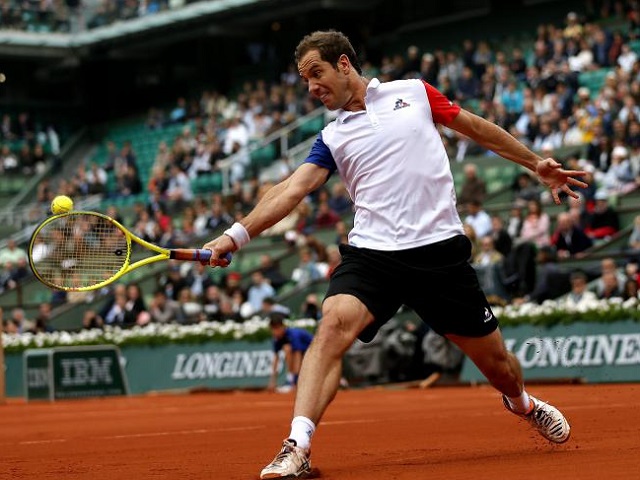