Andy Murray said players should celebrate Novak Djokovic’s achievement in winning so consistently over the last few years rather than being surprised that he was dumped out of Wimbledon on Saturday.

The top seed’s defeat by American Sam Querrey means Murray is the highest seed left in the draw going into the second week, but the world mumber two refused to consider his chances were improved by the shock exit of the man who beat him in both the Australian and French Open finals this year.

“Rather than it being a surprise, it should really be almost celebrated now, what he’s actually done. It’s incredible,” Murray told reporters.”He broke a number of records, winning all four slams, what was it? Thirty consecutive grand slam matches. It’s amazing.”Expectations for Djokovic to continue winning every match were unrealistic, Murray said.”History suggests that that’s not going to happen. There’s going to be a match, where maybe you don’t play your best and your opponent plays great tennis.”Murray was in the middle of a solid and largely straightforward 6-3 7-5 6-2 third-round victory over Australian John Millman when news came through of Querrey’s victory on Court One next door.

One of the partisan crowd’s biggest cheers during his win over the 67th-ranked Millman greeted the score flashing on the big screen.Murray’s composure faltered immediately and he dropped his serve, though he insisted he thought about the result only briefly.”Obviously, if you see a result or hear the fans, then you think about it. That’s natural,” he said.”But it wasn’t something that was going through my mind for more than 10, 15 seconds whilst I was sitting at a change of ends. Then you get on with it.The British 2013 Wimbledon champion got quickly back into his stride, however, and after he broke serve in a lengthy 11th game of the second set, he ran away with the match.

The All England Club was still buzzing with the Djokovic news, but Murray said he would feel no extra pressure.”If I were to reach the final, then it may have some bearing really, but it doesn’t right now,” he said.”My draw’s still exactly the same. The matches, in the next round especially, are tough. Nick and Feli are both very, very good grass court players.”Murray plays 21-year-old Australian Nick Kyrgios or experienced left-handed Spaniard Feliciano Lopez in the fourth round on Monday. 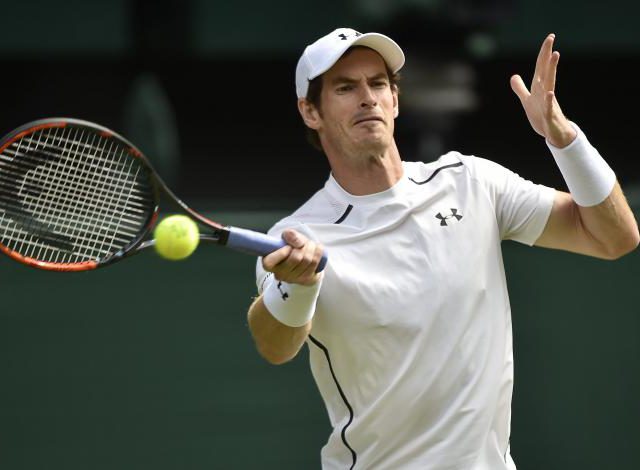