Milos Raonic advanced to his second Wimbledon semi-final as the big-serving Canadian ended Sam Querrey’s surprise run to the last eight with a 6-4, 7-5, 5-7, 6-4 victory on Wednesday.

Raonic is the first Canadian to make the last four at the All England Club more than once and the sixth seed plays seven-time champion Roger Federer on Friday for a place in the final.

He trails Federer 9-2 in head-to-heads.

The 25-year-old will hope it is third time lucky after losing his previous two Grand Slam semi-finals at Wimbledon in 2014 and in the Australian Open earlier this year.

Now coached by former Wimbledon champion John McEnroe, Raonic blitzed Querrey who had knocked out Novak Djokovic in the third round.

He hit 58 winners and served 13 aces and finally looks capable of fulfilling the potential that saw his ear-marked as a future star several years ago.

“There were some momentum shifts there. I’m glad I was able to get back on the right path after he won the third,” Raonic said after tying Eugenie Bouchard’s Canadian record of reaching three Slam semis.

“I was able to get things back on my terms. It’s a well deserved chance to be in the semi-finals.

“It’s exciting, but also humbling because you have to get the win. I hope to do better than last time.”

Querrey’s exit was a low-key conclusion to a memorable campaign for the American 28th seed, who caused one of the great Wimbledon upsets when he knocked out defending champion Djokovic.

But playing his first Grand Slam quarter-final at the 38th attempt, Querrey was unable to reproduce the bold play that shattered Djokovic’s bid for a calendar Grand Slam.

“Kudos to Milos for playing a very clean match. He didn’t miss a volley. I was always playing catch up and in the end he got me,” Querrey said.

Raonic possesses a best-ever serve of 143mph which is especially potent on grass and carried him to the Wimbledon semi-finals two years ago and the Queen’s Club final last month.

Querrey has a ferocious serve of his own and, having hammered their way into the quarter-finals with a combined 198 aces, it was no surprise to see few prolonged rallies in a Court One slug-fest.

Brute force was the name of the game and, heeding McEnroe’s call to be even more aggressive in his mindset, it was Raonic who seized the initiative with a solitary break to take the first set.

Given the dominance of his serve, Raonic needed only one chance to break and win the second set as well.

Querrey kept plugging away and finally got his reward in the 11th game of third set when he converted his first break point of the match with a cool backhand volley.

But Raonic wouldn’t be denied and he sealed a deserved victory with a clinical break in the fourth set. 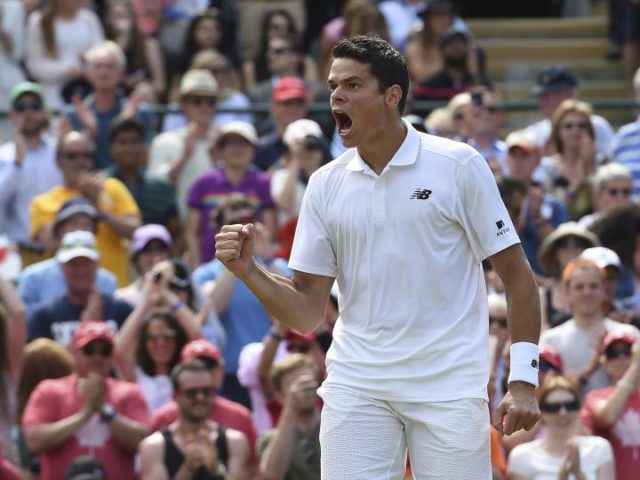