Japanese fifth seed Kei Nishikori pulled out of Wimbledon in agony on Monday mid-way through his last 16 match against Marin Cilic, overcome by the pain from his rib injury.

Nishikori looked completely out of sorts on Court Two and consulted the trainer and doctor before finally throwing in the towel at 6-1, 5-1 down in the fourth round contest.

The rib problem also forced him out of the Halle grass-court warm-up tournament ahead of Wimbledon.

“It’s the same injury that I had in the first match in Halle. It’s not been recovering well these two weeks,” Nishikori told reporters.

“After the third round, it got worse. I was hoping to get better, but it was too much pain. So I couldn’t really compete.

“I was thinking about it in the second set,” he said of his withdrawal.

“Even before the match, I knew it was not going to be easy for me to play 100 percent. Also Marin was playing great on the court. Every point I played, it got worse. I didn’t want to, but I guess I had to retire.”

The struggling Nishikori found himself 5-0 down within 10 minutes, having won just two points. He managed just two winners in the 16-minute set.

In the breaks of play, 26-year-old Nishikori looked forlorn, with his head down, staring at the ground.

He had his head in his hands after serving a double fault to go 4-1 down in the second set, after which his coaching staff — including former French Open champion Michael Chang — pleaded with him to call it quits.

Nishikori called for the trainer and the doctor and was given some pills.

After one more game he shook hands with his opponent.

Nishikori also withdrew from last year’s Wimbledon in the second round with a left calf injury.

Despite the second withdrawal, Nishikori said he was pleased with how Wimbledon had gone for him, having beaten Sam Groth, Julien Benneteau and Andrey Kuznetsov.

“It was actually a great, great tournament for me. With the pain, I fought through these three rounds. It wasn’t easy to mentally stay tough every match.”

He is targeting the Toronto Masters, which starts on July 25, before the Olympics.

“It was a good lesson for me. I’ve got to recover well. All the big tournaments are coming up in the summer. Hopefully I can recover well and train hard again and get ready for Toronto.

“I’ve got to see how long it’s going to take. But I think I have enough time to recover.

“Every time I get injured I learn a lot of things. But actually this year has been pretty good, physically. The only injury I got is Halle and here.”

He was bidding to reach the Wimbledon quarter-finals for the first time in seven attempts — the only one of the four majors where he has yet to make the last eight.

Nishikori was also hoping to become only the second Japanese man to reach the Wimbledon quarter-finals, after Shuzo Matsuoka in 1995.

He was the last Asian player left in the tournament after compatriot Misaki Doi was beaten in the women’s last 16 by Australian Open champion Angelique Kerber in the preceding match on the 4,000-seater Court Two show court.

Cilic, who beat Nishikori in the 2014 US Open final, has now reached the Wimbledon quarter-finals three times in a row. 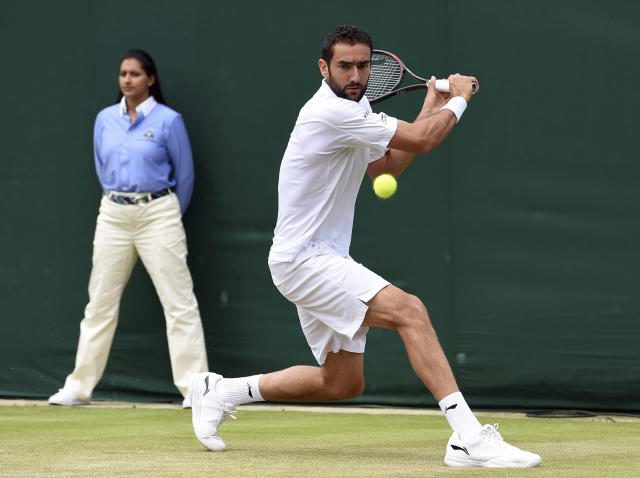