Today, Monday the 27ª the 130ª edition of Wimbledon starts, the oldest and prestigious tournament of the profesional circuit, disputed since 1877 with the only interruptions during the periods of 1915-1918 and 1940-1945 which correspond to the two world wars that destroyed Europe.

Wimbledon is tradition, grass, strawberries with champagne, it is the Henman Hill, the pure white of the clothing of the players, the old scoreboard of lights on every court, is the British royalty and aristocracy, it´s even the Brexit. But, above all, Wimbledon is history and tennis, the biggest monument of this sport in the whole world.

The tournament is organized, as it has always been done since the first edition, the All England Tennis and Croquet Club, an exclusive institution which only has 375 members of right plenary session. The All England Club, as it´s commonly called, they give all the profit of the tournament to the Lawn Tennis Association for the development of tennis in the United Kingdom. They look also to maintain an adequate balance of the tradition and innovation, and in this way, like in many others, the tournament is Wimbledon is unique.

The first edition of the tournament was disputed on 1877, only on the men’s singles categories, and with a draw of 22 players, all of them British amateurs. Spencer Gore won the tournament, a local player which was 27 years old that drived him on to history- he could not imagine this- as the first champion of Wimbledon. He didn´t defend his title and didn´t play again in this tournament. 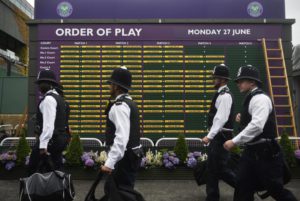 The tournament was a success and it slowly started to incorporate to the British tradition. In 1884 two new categories were added to the tournament :Women singles and men´s doubles. Maud Watson was the first woman to be crowned champion- repeating victory the year after- and the Renshaw brothers the first pair to win the title. The women double and the mix doubles started later on in 1913.

All the greatest players of all time have played on the grass of Wimbledon, and nearly all of them have succeeded. From the top-20 of all time according to thetennisbase ranking, only three of them couldn´t raise the golden Challenge Cup: Ken Rosewall, four time finalist, Ivan Lendl, who reached the final on 1986 and 1987, and Pancho Gonzales who only participated 5 times. Rosewall and Gonzales lost lots of opportunities as they dedicated a big part of their career to the professional circuit which excluded the Grand Slam tournaments. For sure, their luck would have changed if they had participated on the Grand Slams in the best years of their carreer.

Three players share the London throne with seven victories each. William Renshaw, a British born in 1861, Pete Sampras and Roger Federer share the honour of being the players with more titles in the Cathedral of tennis. Furthermore, Federer is the player with more finals played, ten, as we have to add to his seven trophies the finals lost against Nadal in 2008 and against Djokovic the last two years. Wimbledon table of records

Talking about the number of victories, Jimmy Connors is the king, that with his 21 participations he achieved 84 victories. Below him we find Federer with 79 victories, and if the Swiss is able to reach the semi-finals this year he would reach the record of the American. Following them we have Boris Becker, with 71 victories, Arthur Gore, another British of the heroic times, three times champion of the tournament, with 64 victories and Pete Sampras with 63. Connors is also the players with more games played over the grass of the All England Tennis with 102 games played, the only male player with over 100 games played on Wimbledon. 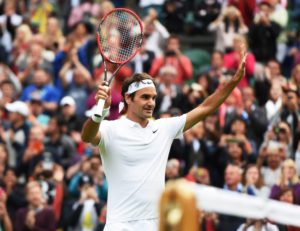 Another interesting record is the one of the best percentage of victories, considering at least ten games played. In this section there is a clear American predominance with Ellsworth Vines in first position with 13 victories from 14 games played (92,46%). They follow him Bjorn Borg with the stratospheric record of 51 victories in 55 games with a percentage of the 92,73%. Don Budge (92,31%, 24 from 26), Dick Savitt (91,67%) and Bill Tilden (91,18%) complete the quintet of major effectiveness on the history of the tournament.

Some winning strikes are impressive. William Renshaw won the tournament from 1881 to 1886, six consecutive wins. With 5 consecutive titles we find Laurence Doherty (1902-1906), Bjorn Borg (1976-1980) and Roger Federer (2003-2007). Furthermore, the Swiss has the record of consecutive finals with 7 finals played, from 2003 to 2009. Doherty is also the player with more titles in total, as we have to add to his five individual titles eight doubles, for a total of thirteen titles.

Borg is the player that has won more games consecutively, 41 from 1976 to 1981. Federer with 40 has remained one away of drawing with the Swedish; the walkover of Tommy Haas in the round of 16 in 2007 made it impossible for the Swiss to lead this classification.

The final with more games played, was the one of 2009, disputed between Federer and Roddick with a total of 77 games played. Federer  also played on the both finals that follow, the remembered against Nadal in 2008 with 62 games (and the longest on time played ever) and the one of 2014 against Djokovic with 58 games played, the same as the one o 1954 between Jaroslav Drobny and Ken Rosewall. Quite far away from the record of the tournament between Isner and Mahut in the first round of 2010, 1813 games played and 11 hours and 5 minutes of game duration. On the other hand, the shortest finals were the ones of 1936, Fred Perry defeating Gottfried VonCramm 6-1 6-1 6-0 and the one of 1881, William Renshaw defeating John Hartley 6-0 6-1 6-1.

Boris Becker is the youngest player to become a champion of the tournament with 17 years and 222 days when he won on 1985. The oldest is Arthur Gore who was 41 years old and 182 days when he was champions in 1090. In addition, Gore is the player with more participations on the tournament, 31. The British didn´t miss an edition between 1822 and 1922, a record that is very likely to remain indefinitely in the book of Wimbledon. 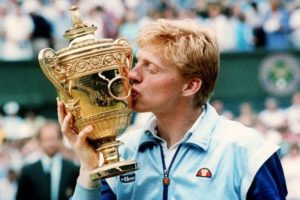 The same as other records, which seem impossible to break now a day. Josiah Ritchie, one of the best players of the world on the early 20º century, played his last men´s individuals with 55 years and 247 days. Jean Borotra, the legendary French musketeer, went even further and in 1963 participated in the category of men doubles, with Mustapha Belkhodja, at the age of 65 years and 320 days.

William Renshaw, Joshua Pim, Laurence Doherty, Anthony Wilding, Don Budge, Tony Trabert, Chuck McKinley and Njon Borg in 1976 have been the only men to be able to win the tournament without losing a set. However, it has been Jack Kramer the player that, playing the seven matches, has conceded less games in one edition. The patriarch of the professional tennis won on 1947 conceding only 37 games, despite losing the second set on the semi-finals against Dinny Pails.

Martina Navratilova stands out between the women with nine individual titles, six of them consecutive and 20 in total, the same as Billie Jean King. Navratilova also has the major number of consecutive individual finals, with nine, although the best total record is from Blanche Bingley Hillyard who played 13 finals between 1886 and 1901, which from those 13 she lost seven, the same as Chris Evert. 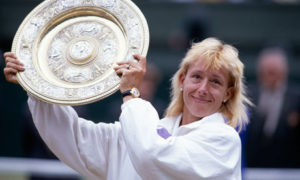 The youngest champion was Lottie Dod, winner in 1888 with only 15 years and 285 days. The oldest was Charlotte Cooper, with 37 years and 282 days in 1908. The names of the biggest champions are heard in every corner of the All England; Maud Watson, the first of all, Dorothea Douglass, the first seven-time champion, Suzanne Lenglen, six time champion, the first great media phenomenon because of tennis, Helen Wilis, the invencible American, eight-time champions, Dorothy Round, Louise Brough, Maureen Conolly, Althea Gibson, the first black person winner of a Grand Slam, Maria Bueno, Margareth Smith, Evonne Gooalgong, Virginia Wade, Steffi Graff and the Williams sisters Venus and Serena. The history of women tennis also rests in the central court of Wimbledon.

The world changes quicker each time, but Wimbledon still remains, attached to its traditions, not because of stagnation or stubbornness, but because of respect to history, to their champions and to some values which have always been the essence of sport. Someone had to make sure that some things never totally disappear and Wimbledon is the guardian . To be like this forever. 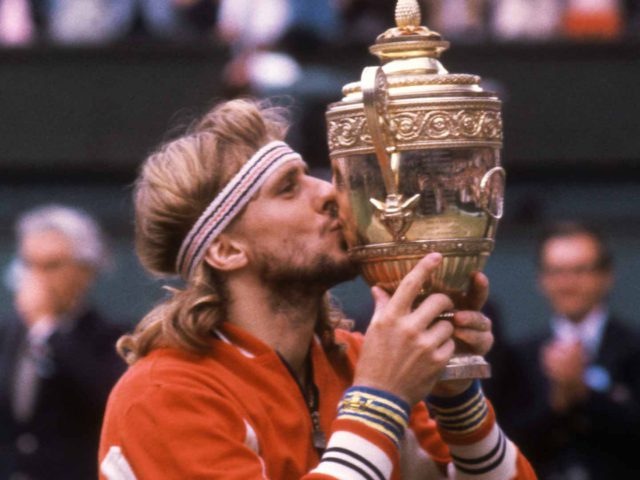