A Frenchman being involved in a long — or rather very, very long — fifth set epic against John Isner at Wimbledon had a feeling of deja vu about it.However, Jo-Wilfried Tsonga made sure he did not end up on the losing side as his compatriot Nicolas Mahut did six years ago after he saved a match point to beat the American marathon man 6-7(3) 3-6 7-6(5) 6-2 19-17 on “People’s Sunday”.

A backhand volley finally carried Tsonga into the fourth round after four hours and 24 minutes of nerve-jangling drama, with the fifth set alone lasting two hours and eight minutes.Isner had a match point on Tsonga’s serve while leading 16-15 but the Frenchman blasted a forehand winner to stay alive and 16 minutes later he was the one leaping into the air in celebration.”It’s good to be alive,” said a grinning Tsonga after he booked a fourth-round showdown with childhood friend and compatriot Richard Gasquet.

Compared to Isner and Mahut’s three-day struggle in “the endless match” — which dragged on for 11 hours, five minutes and culminated with the American winning the final set 70-68 — the class of 2016 never needed to showcase the same levels of mind-boggling endurance as it was all over in only two days.Resuming with Isner leading 7-6(3) 6-3 6-7(5), it took Tsonga just 25 minutes to draw level on Sunday and stretch the tussle into a highly-anticipated fifth set.

Once there, the only break point before the 32nd game of the set was at 5-5, but Isner dodged that bullet by hurling down an ace.While Tsonga and Isner showed little sign of wilting, umpire Carlos Bernardes was not feeling as lucid on his lofty perch and struggled to keep pace, announcing “Isner leads by 16…sss…to fif…15” as the match entered its fifth hour.But moments later it seemed that Isner would finally end Bernardes’s long day in the office.The 18th seed reached match point after Tsonga ended a rapid net exchange — which featured a slam-dunk smash and a flashy reflex volley — by swiping a backhand volley into the tramlines.

Tsonga reacted to the crisis by belting the ball out of Court Two to calm his nerves and went on to stay alive with a forehand winner before winning the next two points.The French 12th seed, who started to dread that “it’s going to be long like Nicolas (in 2010)” finally earned the breakthrough to go 18-17 up after his rival thumped a forehand wide.A double fault on his first match point kept the heart racing but a point later he was swinging his arms around and jumping up and down in triumph.”Hope I will have a good recovery from this one and be fit to play tomorrow,” said Tsonga, who has a 6-0 record in five-set matches at Wimbledon.

As for Isner, he felt the weather Gods had conspired against him as he felt he had been “on the schedule forever” after rain denied him the usual rest days at this year’s tournament. 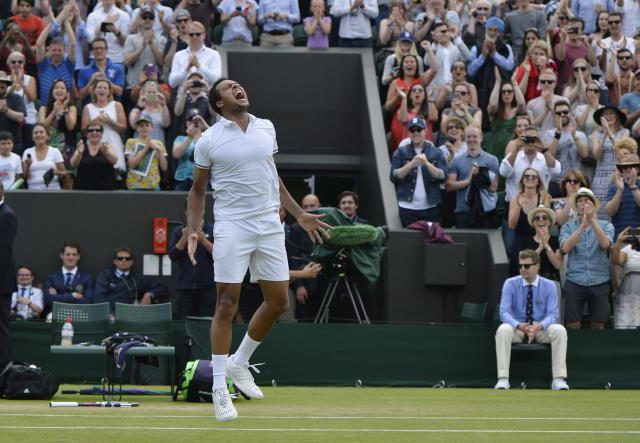