Conditions — as so often during a rain-ravaged tournament — were cold and damp. That was one reason why the crowd remained disappointingly small throughout a see-saw encounter that, until a late Goffin meltdown that saw him concede nine games running in going out 4-6 7-6(7) 6-4 6-1, threatened to become one of the matches of the tournament.

Thiem, 22, who will break into the top 10 for the first time with Thursday’s win, described as “a little bit unreal” the prospect of playing a semi-final against Djokovic, a player he has never beaten in two encounters.

“But from this moment I have to focus on tomorrow or Saturday – I don’t know when,” he said courtside, with one eye on the rain that was falling steadily when the match finished.

Both players, who often practice together and are friends off court, took time to find their range and the first three games yielded three breaks of serve, including one that Goffin conceded on a double fault.

Thiem gradually began finding the lines with heavy groundstrokes off both wings and, as Goffin struggled to maintain depth on his returns, sped into a 4-2 lead. But as Thiem’s accuracy waned, the Belgian tightened his defence and, playing the key points better than his opponent, reeled off the next six games. He converted his first set point at 5-4 on a Thiem service game when the Austrian hit a backhand groundstroke long.

With Suzanne Lenglen Court still barely a quarter full, the match continued to swing in favour of first Thiem — firing rasping groundstrokes that either pummelled the baseline or shot long — and then Goffin, less powerful but mixing his game well to prevent the Austrian from settling into a rhythm.

The second set went to a tiebreak in which Thiem, after leading 5-4, scraped through 9-7 when Goffin failed to return a vicious backhand slice.

Goffin broke earlier in the third and led 4-2 when the mood abruptly shifted. A match that briefly threatened to become a classic petered out disappointingly as Thiem, adding the precision that his power game had earlier been missing, won nine of the last 10 games.Asked at a news conference to explain the nine-game losing run, Goffin said: “The balls were soaked with water, and the clay was heavy and he was more comfortable during the fourth set. And then he was more aggressive.” 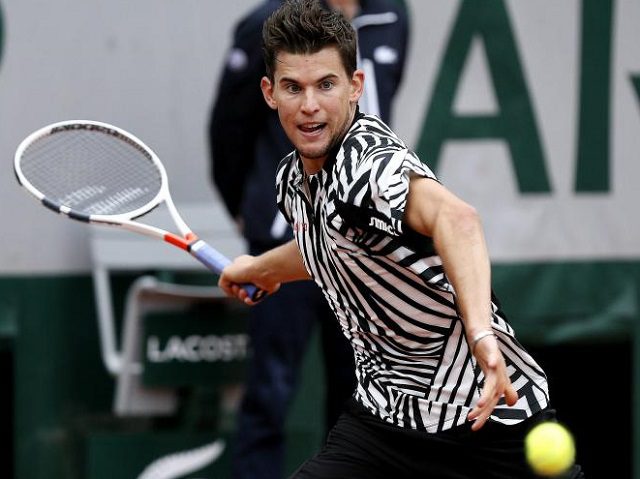