Berdych is one win away from reaching his second Grand Slam final six years after losing to Rafael Nadal in the Wimbledon title match.

The 30-year-old, who blasted Pouille off Court One with 35 winners and 10 aces, will play former Wimbledon champion Andy Murray or French 12th seed Jo-Wilfried Tsonga in Friday’s semi-finals.

He has now made it to six Grand Slam semi-finals, losing in four of his previous five appearances.

“On paper it looks pretty easy, but really I had to work hard for that,” Berdych said.

“I had to find my rhythm and when I did in the first set tie-break I felt much better. After that it was more straightforward.

“It’s a great feeling. I hoped one day I would have the chance to use the experience from my Wimbledon final and I’m going to go for it again.”

Berdych was playing in his 15th Grand Slam quarter-final, while Pouille had reached the last eight of a major for the first time and the gulf in experience and class quickly became apparent.

Pouille started last year as the world number 133 and arrived at Wimbledon never having won a tour-level match on grass or made it past the second round of a Grand Slam.

Having seen off young guns Alexander Zverev and Jiri Vesely in the previous two rounds to reach his third successive Grand Slam quarter-final, Berdych was in fine form and he had no trouble maintaining that momentum.

After an early exchange of breaks, Pouille called for a treatment on a finger on his right hand at 3-4 in the first set.

The 22-year-old held on to force a tie-break, but Berdych played the big points flawlessly to take a lead that quickly became two sets to love as he surged through the second.

An early break in the third set was all the incentive Berdych needed to seal his drama-free progress to the last four. 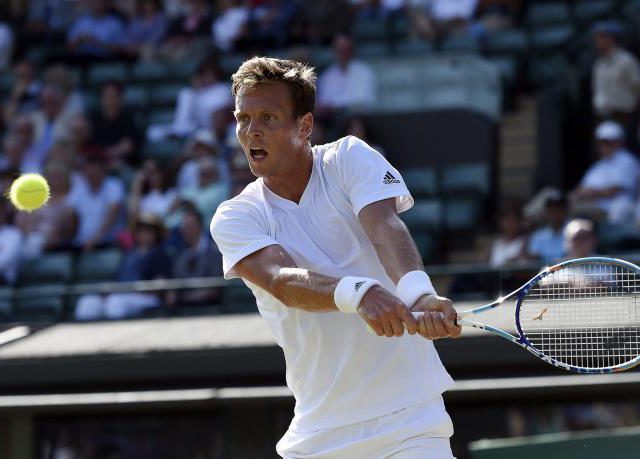