Rafael Nadal played today with German Philipp Kohlschreiber his 1,000th match on the ATP circuit. 822 wins and 178 losses for the third best percentage of victories of the Open Era, after Borg and Djokovic. All an ephemeris for one of the best players all time and a universal symbol, recognized throughout the world for his sportsmanship, his hunger for victory and his irreducibility.

In this special moment, we want to remember the 10 most significant victories of the Manacorí. They may not always coincide with the most important ones of their career, since we have sought, besides enhancing his great and innumerable successes, those milestones that best help to describe his path.

It was only the ninth ATP match for Rafa who had broken into the circuit like a cyclone, with 5 wins in his first 8 matches and defeating Albert Costa, number 7 in the world, the previous week in Monte Carlo in what was his debut before a top-10.

Nadal and Moya knew each other very well. They trained together regularly in Mallorca and had played among them numerous matches in which, as Moyá often recalls, the young man of 16 years always was defeated.

It is reasonable to think that Moyá, then number 4 of the world, would enter the court calm and sure of the victory. However, Nadal already anticipated that he knew nothing of complex and played at maximum intensity to score the victory in straight sets. The young promise waited for the official party to defeat his friend for the first time. Nadal was 2-0 with the top-10 in only 9 professional matches. Perhaps for the general public the data went unnoticed, but for the world of tennis was all a warning of what was coming.

Spain reached the Davis Cup final for the third time in five years. Moya, who longed to win the trophy, was fully involved in the goal and was the undisputed leader of the Spanish team. Nadal was in all the crosses and was the hero before Czech Republic and France.

However, facing the final, Nadal’s lineup with Roddick, then number 2 in the world, seemed quite bold. Too much responsibility for a young man of 18 years and very short experienced. In addition, Robredo and Ferrero, teammates, were much better ranked in the ATP list and they were much more experienced. With alternatives of such, the risk of playing Rafa seemed excessive. However, Moya and Perlas insisted. Nadal had to play.

Roddick might be surprised by the Spanish team’s decision. If so, the wonder would last a little. Rafa played a brilliant game, wasting energy and intensity. His superhuman defenses, incredible counterattacks and explosive celebrations enraged La Cartuja and millions of viewers. He was born not only a great champion, but also a spectacular and emotional player who moved in the extraordinary with naturalness.

Nadal came from winning Monte Carlo – precisely before Coria, the best player on brick dust of the moment – and the Godo defeating Ferrero in the final, revealing himself as a huge player on clay.

Coria arrived with desire of revenge and ready to make use of the hierarchy, if not of the ranking – by then Rafa already was ahead – if at least the one of the experience. The match was tremendous, to the limit of the 5 sets and with a duration of 5 hours and 14 minutes, the longest final ever disputed in a Masters 1000.

Coria went 3-0 up in the fifth set and looked as if he could tip the balance in his favor. But Nadal made the miracle again to come back in extremis and finish the game in the tie-break. It was Nadal’s 17th consecutive victory over clay- in a streak that would last up to 81 wins – and, in the absence of the Roland Garros doctorate, which proclaimed the Balearic as the king on that surface.

Rafa missed the previous edition of Roland Garros by injury and debuted that year in the Parisian clay with all the pronouncements in favor. In the horizon only the stumbling block of Roger Federer was perceived, already with vitola of quasi invincible and that arrived at Paris with a streak of 57 victories and 2 defeats. The Swiss and the Spanish fell in the same half of the draw and the confrontation in semifinals was inevitable. An authentic final in which Nadal ended up overwhelming to the number one of the world demonstrating that it had no rival on clay. Two days later, Rafa raised his first Cup of the Musketeers. The future would hold another eight. 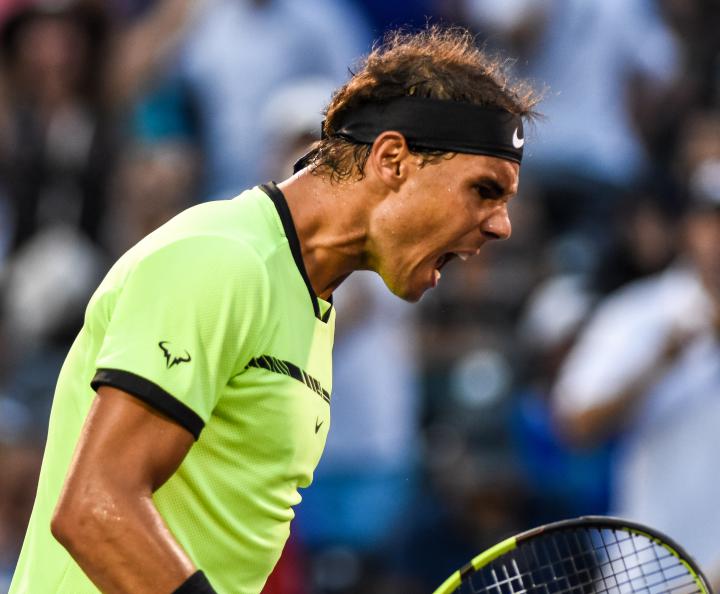 In 2006 Rafa remained untreatable on clay. Three weeks earlier he had beaten Federer in Monte Carlo and already aheads the h2h 4-1. The Swiss, at the pinnacle of his career, came to this appointment playing like angels and willing to prove that he was the best on any surface. And certainly Federer was close to achieving it; 4-1 in the fifth set, then two match balls with 5-4 and finally could not materialize a 5-3 lead in the final tie-break. The intensity of Nadal, which began to beat all kinds of records of precocity, again frustrated the Swiss. And by the way showed that there was no more difficult task in the professional circuit than to win Nadal the last point of a match.

Nadal, already four times champion in Paris, came for the third time to the Wimbledon final. The previous year he fell in the same game against the Swiss in 5 sets in what was one of the hardest defeats of his career. Rafa entered the court willing not to let the story be repeated and clearly prevailed in the first two sets. But Federer, who had been unbeaten for 5 years on grass with a 65 wins streak, won the next two in tie-breaks. With the shadows of the night hovering over the central Wimbledon and excitement overflowing everything and everyone Nadal achieved the break in the fifteenth game of the fifth set to confirm it in the following and finally fall victorius -after 4 hours and 48 minutes of game and 413 points disputed – on the green carpet of the field with the most ancient tradition of the world. An end that has remained forever as one of the most valuable jewels of the golden book of all time tennis.

Nadal faced his first Olympic Games as a virtual number one, although not yet in the ATP ranking, and at the best moment of his career. On the other hand, Djokovic, number 3, was conforming each day like the great alternative to the binomial Federer-Nadal. The two titans crashed in the semi-finals. Nadal started well, getting the first heat. But the Serbian reacted and impressed a great rhythm overwhelmed Nadal in the second. In the third and final, with Djokovic constantly pressing the service of Nadal, came the opportunity of the Balearic in the tenth game, in a break point that Djokovic dominates but misses an easy smash that has gone down in history. The constant fight of Rafa this time was the prize of the Olympic gold that would conquer before the Chilean Fernando González.

The 19th matchup between Nadal and Federer was also the first in a Grand Slam over hard surface. Nadal had finished with five years of reigning of the Swiss in the ranking ATP and the Swiss longed for the revenge in a favorable surface. The match was the umpteenth marathon between these two colossus and fell again on the side of the Spanish who managed to defeat the genius of Basel in the finals of three different Grand Slam. In the end, Federer could not contain the disappointment and burst into tears at the awards ceremony. Rafa was consolidated as number one and as a total player, able to win titles on any surface. 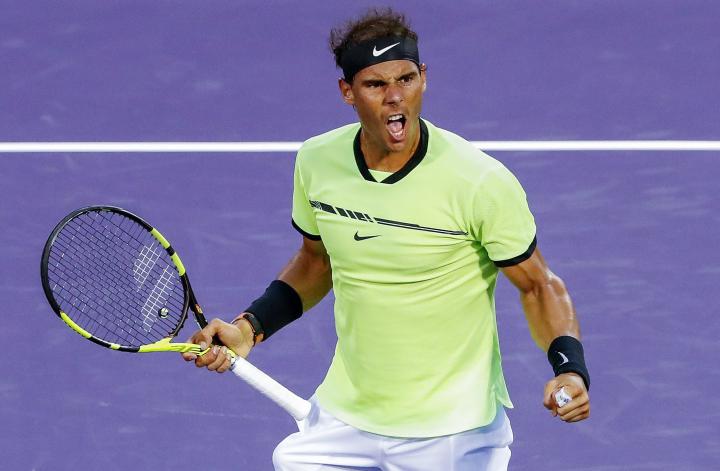 Djokovic, number one in the world, had become a real black beast for Nadal. In 2011 the Serbian had defeated Rafa in 6 consecutive finals and returned to do so in the dramatic end of Australia 2012. However, he still had not been able to raise the Cup of the Musketeers; In 2011 Federer took him away from the final in an incredible semi and in 2012 Nadal proved that he was master and lord in the Philippe Chatrier.

The semi 2013, with Nadal newly incorporated to the circuit after his problems of the previous year, arrived with the maximum expectation. It seemed that this time the Serbian would not let the occasion pass. The game was very hard and very even. In the fifth set, with Djokovic advantage 4-3 40-40 and serve, the Serbian sends a right to a half track, strong and deep, Nadal’s backhand returns very short. The number one volley down to a few centimeters of the net, but it becomes disjointed and ends up swallowing this one. A point for Rafa that will end breaking Djokovic and in the end winning the match. Another victory of Nadal to the limit of the impossible.

With the 2011 effect thinning out, Nadal and Djokovic were once again in New York with the number one at stake. Nadal had won five of the last six games with the Serbian – while four were on clay – and had the opportunity to put a finishing touch to his spectacular comeback. The match was matched in their first two sets, but Djokovic ended up bending over after conceding the third heat. Rafa thus obtained its second US Open and two months later closed for the third time the season like number one of the world. 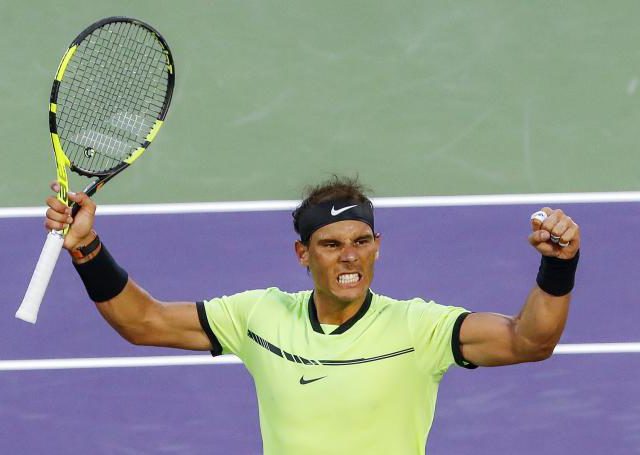