The British team will not be able to retain the Davis Cup trophy after his defeat with Argentina by the result of 3 – 2. Argentines reach so his fifth final, where they will face to Croatia, who beat France also 3-2, with the objective of clinching the trophy for the first time.

It is been a very worthy path of the Argentinian team in this Davis Cup. In the three playoffs played – all as visiting – the top-ranked player has been Federico Delbonis, 40th in the world in the list of 11-07-2016, week in which Argentina faced Italy and Delbonis got two wins in singles. Federico, together with Leonardo Mayer and Guido Pella have achieved seven victories in singles creating a great team that have performed well above expectations their rankings promised.

Juan Martin Del Potro has showed up just in time to add that quality to the game in the play-off with British. He beat in the first match none other than Andy Murray in a tight match of five sets, which meant the first defeat of number 2 in the world in an individual match of Davis Cup on British courts, breaking a streak of 20 consecutive victories. The Argentinian has won in the past two months to Wawrinka, Djokovic, Nadal and Murray and since Wimbledon he holds a balance of 12 wins and 3 losses. In addition, Del Potro also broke his negative streak of seven consecutive matches lost in the fifth set. The Argentine did not know what it was to win a match in the fifth set since he beat James Blake in the Australian Open 2010 by 6-4 6-7 5-7 6-3 10-8.

Argentina unlocked Glasgow´s playoff since the beginning. To the triumph of Del Potro followed the victory of Guido Pella over Kyle Edmund in four sets. It seemed the playoff was virtually decided, but on Saturday Murray´s brothers defeated to Del Potro – whose alignment in doubles match caused a great controversy about its convenience – and Mayer. On Sunday was announce the loss of Del Potro for the fifth match – apparently the Argentine did not want to risk a new injury – and, after the landslide victory of Andy Murray over Pella, it seemed that British turned as favourite to get the victory. But Leonardo Mayer solved the problem with an outstanding win over Daniel Evans in four sets. Mayer, who with this victory accumulated 10 consecutive singles wins on Davis, thus became the unexpected hero, leading a surprising Argentina to a new final.

Argentines will have to face Croatia at the final. A very difficult challenge since it will be played in Croatia and, surely, they will choose a very fast indoor court, ideal for Marin Cilic and even for Ivo Karlovic if he would join to the team. Cilic showed he is the clear leader of Croatia with his victories against Lucas Pouille and Richard Gasquet, losing just a set and scoring also the doubles match´s point in couple with Ivan Dodig.

Argentina leads the balance against Croatia 3-0, they got the victory in the quarter finals of 2002 (3-2, Buenos Aires, on clay), 2006 (3-2, Zagreb, on hard) and 2012 (4-1, Buenos Aires, on clay). It is remarkable that neither Cilic nor Karlovic have been able to get a single win against the Argentinian in all these clashes. Cilic has three losses in singles (one of them against del Potro in 2012) and two in doubles, while Karlovic, who already played the playoff of 2002, has a similar balance with three losses in singles – he lost once facing Del Potro — and one in doubles.

On the other hand we do not must forget the Argentine´s curse at finals, where legendary players such as Jose Luis Clerc, Guillermo Vilas, David Nalbandian and Juan Martin Del Potro never achieved to bring the Davis Cup to Argentina.

There were few surprises in the rest of playoffs. Maybe the most important was the victory of Switzerland in Tashkent, with a team of circumstances in which Antoine Bellier, Henri Laaksonen and Adrien Bossel neutralized the two victories of Denis Istomin for the Uzbeks.

Spain, Canada, Japan, with Nishikori playing just the doubles, Australia and Belgium got the victory without losing a single point. Russia beat Kazakhstan 4-1 and Germany went through troubles to defeat Poland 3-2. The World Group will incorporate in 2017, therefore, to Spain and Russia instead of Kazakhstan and Poland which descend of category. 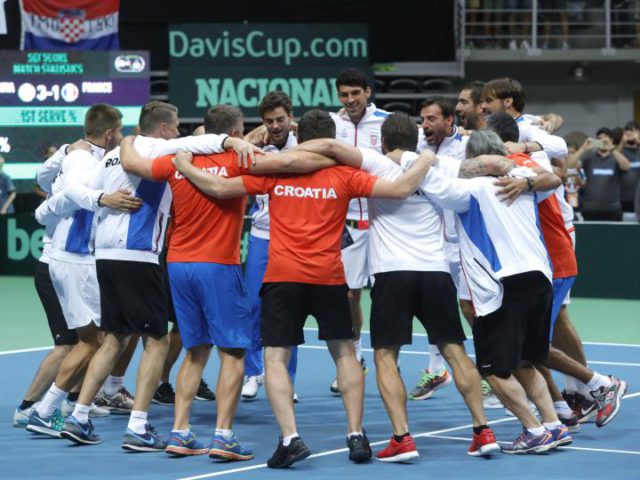