The Czech Republic and France were tied 1-1 after the opening rubbers of their Davis Cup World Group quarter-final on Friday as both number-two players beat the team leaders.

The tie started with a minute’s silence for the victims of Thursday’s terror attack in Nice that left at least 84 dead including ten children or youths.

On the hardcourt of the Werk Arena in the eastern Czech town of Trinec, the big-serving, 30-year-old Rosol got off to an impressive start against Tsonga, taking the first set on a single break.

But Tsonga, who is 31, regained his first serve in the second set and took a 2-1 lead with a break in each set.

Both held on to their serve in set four, with Rosol taking it in a thrilling tie-break after escaping from two match points.

Rosol and Tsonga traded breaks in the first two games of set five but the Czech then added another and converted his third match point.

“I have no words for what happened on the court today,” Rosol told Czech television.

“It’s a fantastic feeling to play as number two against a number one and win in five sets.”

“I didn’t serve too well but I gave it what I could. Lukas played a great game,” he said.

“We got up and learnt what had happened (in Nice). It’s not easy to play when such things happen but at the same time it was important for us to go to the court and give our best.”

In the second rubber, Pouille had few problems with Vesely who piled up 34 unforced errors in the three sets.

“The rubber was all about mistakes that I can’t afford to make at this level.”

Pouille said his Davis Cup debut was tough as “Vesely is a really good player with confidence”.

“I tried to go there and play, impose my style, serve well, be there for each point,” he told AFP.

In Sunday’s reverse singles, Vesely will face Tsonga before Rosol takes on Pouille.

The winner of the tie will face either the United States or Croatia in the semi-finals. 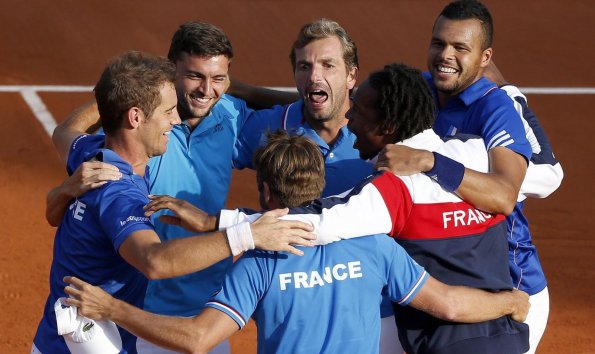