The 29-year-old Frenchman, who had not won a crown since 2014 at Montpellier, took his first ATP title outside of Europe and his first outdoor trophy since Sopot in 2005 as well as claiming the top prize of $348,200 (317,266 euro) on the US capital hardcourts.

Monfils withstood a barrage of 27 aces from the 37-year-old Croatian, firing back 16 of his own. He ended Karlovic’s streak of 70 unbroken service games when the Croatian served for the match in the 10th game of the second set.

Flamboyant Monfils denied Karlovic on a match point in the second-set tiebreaker as well, broke him again in the third game of the final set and held from there to win in two hours and 13 minutes.

Monfils became the third French player to win the Washington crown after Yannick Noah in 1985 and Arnaud Clement in 2006.

“This tournament means a lot to me,” said Monfils. “When I first came here I saw the (champion) names — Arthur Ashe, Yannick Noah — and they have been inspirations for me. I’m very proud and very happy to have my name next to them.”

Monfils improved to 6-19 in ATP finals, including a 2011 Washington final loss to Radek Stepanek. Monfils had dropped his prior three finals in a row, including in February at Rotterdam and April at Monte Carlo, and eight of his past nine finals since 2011.

Karlovic, who fell to 7-9 in ATP finals, won his seventh career title last week on Newport grass to become the oldest tour singles champion since 1979.

Monfils, who will jump from 17th to 14th in the world rankings, was the week’s best at breaking serves and overcame Karlovic’s powerful ball bashing in sweltering heat and humidity.

Karlovic, ranked 35th, had not dropped a service game in Washington entering the final and averaged more than 20 aces a match this week.

Monfils double faulted away a break in the 11th game of the first set, then squandered three break points in the 12th game after moving closer to the baseline to counter Karlovic’s serves.

Karlovic blasted a 141-mph ace with his hardest serve of the match to save the last break point, then after Monfils sent a backhand wide, Karlovic followed with an overhead smash to claim the first set.

Karlovic broke on an overhead smash for a 5-4 lead in the second set, but again handed Monfils triple break point only to save them all, this time with an overhead smash, a second-serve ace and a backhand volley winner.

But Monfils responded with a forehand volley winner and Karlovic sent a forehand long to surrender a break after having held in 70 consecutive service games, including all 53 prior at Washington.

In the tie-breaker, Karlovic hit a service winner to reach match point at 6-5 but Monfils answered with two service winners of his own and Karlovic then netted a forehand volley to surrender the set.

Monfils broke for a 2-1 lead in the deciding set when Karlovic flicked a backhand long. 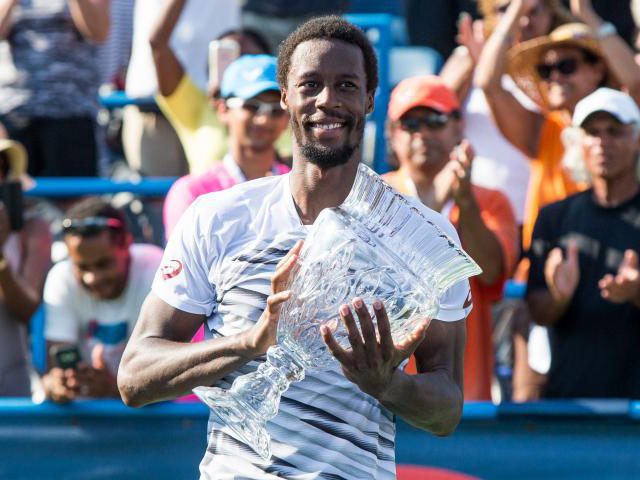