Andy Murray stormed into his third Wimbledon final as the Scot crushed Tomas Berdych 6-3, 6-3, 6-3 on Friday to set up a title showdown with Milos Raonic.

Murray gave a majestic performance on Centre Court and needed just under two hours to ensure his return to the All England Club final three years after becoming the first British man to win Wimbledon since Fred Perry in 1936.

The 29-year-old made just nine unforced errors, in contrast to 30 by the befuddled Berdych, who was powerless to halt Murray’s progress to an 11th Grand Slam final appearance — a milestone which took him ahead of Perry as the British man with the most major finals on his CV.

“I’m very happy. To make the Wimbledon final is a good achievement. I’ve got one more to go on Sunday,” Murray said.

“The older you get you never know how many chances you will get to play in a Grand Slam final.

“It helps to have experience to deal with the nerves. You learn from those matches in the past against some of the best players of all time.”

With Canadian sixth seed Raonic in his first major final after a shock win over Roger Federer, world number two Murray will be strongly favoured to clinch his second Wimbledon crown and third Grand Slam title in Sunday’s final.

But Murray said: “Milos is playing some of the best grass-court tennis of his career. I’m aware I’ll have to play very well to win.”

Murray will hope it is third time lucky this year after losing the Australian and French Open title matches to Novak Djokovic.

Having faced Djokovic in seven major finals and Federer, who beat the Scot in his first Wimbledon final in 2012, in the other three, Murray finally gets to meet an opponent from outside the traditional superpowers.

Murray holds a 6-3 lead in his head to head with Raonic and defeated the Canadian on grass three weeks ago in the Queen’s Club final.

It is the first time the two Queen’s finalists have gone on to meet in the Wimbledon title match since Stefan Edberg and Boris Becker in 1988.

In his seventh Wimbledon semi-final and 20th in all Grand Slams, Murray emerged to a barely half-full Centre Court as the crowd refuelled following Raonic’s dramatic five-set win over Federer.

Murray didn’t let the lack of atmosphere distract him and he landed the first blow in the second game after an ill-timed Berdych double fault on break point.

After that blunder, Berdych almost fell over the net in his eagerness to bury the smash that gave him a break back in the next game.

But Murray was unfazed by the Czech’s aggression and broke again in the eighth game as Berdych, who committed 13 unforced errors in the first set to just one by Murray, paid the price for trying and failing to bludgeon the Scot into submission.

Berdych looked rattled, blazing one overhead so wide it barely bounced before ending in the stands.

When he drilled a forehand straight at the defenceless Murray, it was easy to wonder if there was any lingering bad blood from their stormy clash at the Australian Open 18 months ago when Murray’s wife Kim launched a profanity-laden tirade at the Czech.

Yet Murray had the upper hand to such an extent that even his usually taciturn coach Ivan Lendl was moved to applaud when the Scot cleverly manoeuvered the 10th seed into yet another vulnerable position to break in the seventh game of the second set.

But, unfurling sublime lobs and drop shots with nonchalant ease, this was a stroll in the early evening sunshine for Murray, who broke early in the third set and finished the job with the air of a man on a mission. 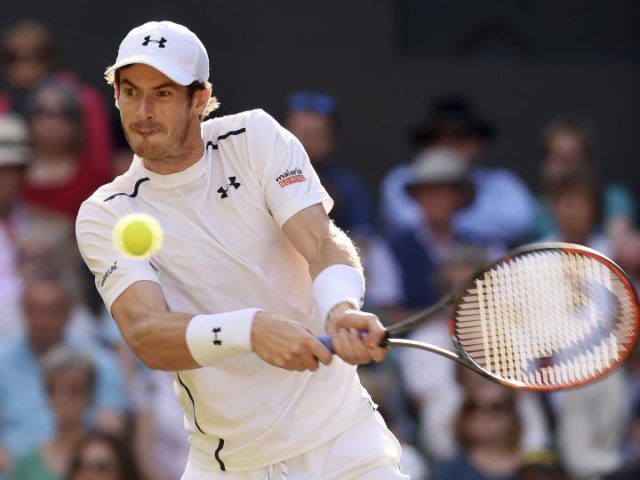