For a seven-times champion who is a month shy of his 35th birthday, and is known to have a dodgy back, fate could not have dealt Roger Federer a better hand this week as he became the first, and so far only, man to reach the Wimbledon fourth round.

With the rest of his rivals stranded in the second or third round following a week of weather mayhem, elegant executioner Federer ensured that he had the weekend off after dropping Dan Evans through the Wimbledon trap door on Friday.”I might take a day off tomorrow just because I can,” Federer said with a grin following his bloodless 6-4 6-2 6-2 victory.”I’m sorry … I have to take them when I can. I’m an old guy.”Forty eight hours after slaying world number 772 Marcus Willis, Federer claimed a second successive British scalp as he advanced to the second week of the grasscourt major for the 14th time.Evans, the once bad boy of British tennis, was on a roll this week as he had never before won a match at the All England Club, let alone two in a row.

But if Evans, the son on an electrician, harboured hopes of going deeper into the tournament, it was not long before the 17-times major champion pulled the plug on his dreams on a floodlit Centre Court.The Swiss third seed chalked up his 150th grasscourt win with an unreturnable serve.”I’m clearly very happy because, well, the goal was to get to the second week somehow. Now I’ve won nine straight sets, which is great,” said the Swiss, whose run of appearing in 65 consecutive grand slams ended when he had to sit out the French Open with a back injury.”I definitely got a bit lucky to play British guys, which put us on Centre Court,” added the Swiss after playing his second successive match under a closed roof.”So I’m the only guy in the fourth round, which is maybe a little bit of an advantage.”

Since being beaten by Tim Henman in the quarter-finals 15 years ago, Federer has now dropped only one set in six matches against Britons at the citadel of grasscourt tennis.While the rest of the players were left cursing their rotten luck, Federer was thankful he had managed to dodge the weather gods.”Tomorrow it’s relax, and Monday hopefully I’ll have great energy when I come back,” added the Swiss, who awaits the winner of the encounter between Grigor Dimitrov and Steve Johnson. 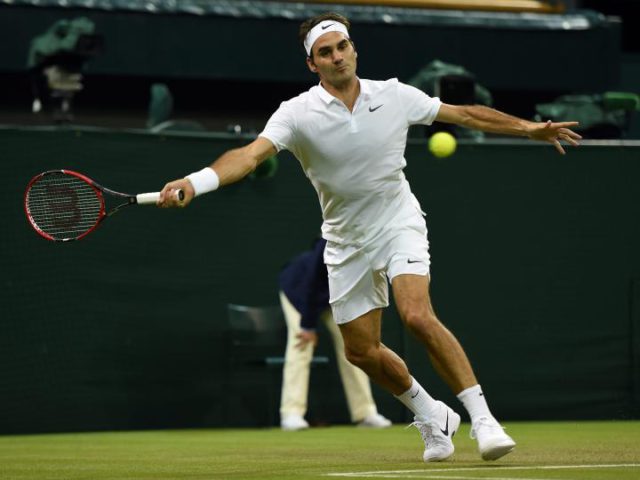