American Sam Querrey survived two scares to complete the biggest shock at this year’s Wimbledon by toppling Grand Slam-chasing Novak Djokovic in the third round on Saturday.Resuming two sets to the good after rain halted his unlikely victory charge on Friday, Querrey lost the opening five games on Court One as Djokovic came out firing.

That was the first scary moment.Then, amidst incredible tension when serving for the match at 6-5 in the fourth-set tiebreak, he gave world number one Djokovic a look at a second serve. That was the other one.It all worked out well in the end, though, as 28th seed Querrey won 7-6(6) 6-1 3-6 7-6(5) to become the first player to beat Djokovic in grand slam play since Swiss Stanislas Wawrinka in the 2014 French Open final.In doing so he destroyed Djokovic’s dream of emulating Rod Laver’s 1969 feat of winning all four slams in the same year.

“I lost the first four games and kind of went, ‘Oh no, this is going the wrong way quickly'” the laid-back 28-year-old Californian Querrey told reporters after losing a doubles with compatriot Steve Johnson, who also reached the singles last 16.”But, I actually felt pretty level-headed and steady the whole time. In the fourth set tiebreaker when I missed my serve at 6-5, I kind of went like, ‘Oh, crap.'”Fortunately I played a good second serve and he missed the forehand wide. That was it.”

Querrey was still second favourite when play began on Saturday, despite a commanding lead.After all, Djokovic had never lost to an American at Wimbledon and had not bowed out of a grand slam before the quarter-finals since losing in straight sets to Philipp Kohlschreiber in the third round of the 2009 French Open.When Querrey went 4-0 down it looked ominous.A short rain break came to his rescue though and, while he lost the third set 6-3, the interruption gave the American time to remember what he had been doing the previous evening.

“I think going out I lost the first four games, and I think the rain delay helped me,” he said. “I got to regroup.”I broke back once in the third set which helped me gain back a little momentum for the fourth set.”Querrey saved 11 of 12 break points in the fourth set, broke Djokovic when the world number one was serving to level the match, and showed great composure in the tiebreak.It was Friday’s opening tiebreak that convinced Querrey he could win the match though.”Once I won that, I was like in my head, all right, I can beat this guy, I can hang with him and turn this into a match,” the world number 41, who banged down 31 aces, said.

After such a scalp it would be easy for Querrey to lose focus, but he wants to take full advantage of his victory.”Yeah, I mean, it’s definitely the biggest win I’ve ever had. It’s been a surreal day. But there’s another match after this. Hopefully I can keep it going, make a quarter-final of a slam, which I’ve never done before.”With Johnson already through to the fourth round where he faces Roger Federer and John Isner two sets to one up against Jo Wilfried Tsonga in the third round, the U.S. could have three men in the last 16 at Wimbledon for the first time since 2004. 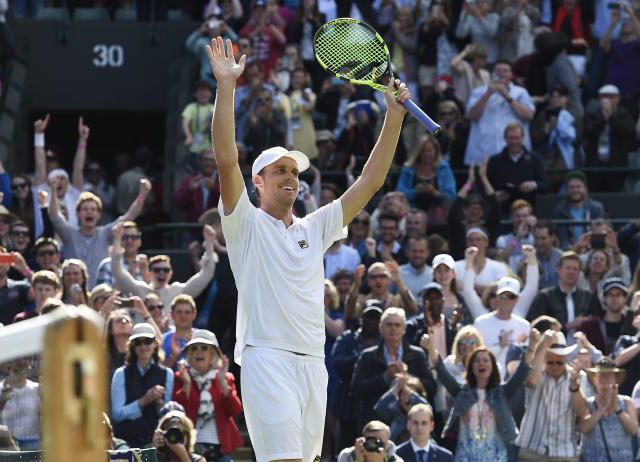