Miami Masters has been, as expected, another triumphant tour of the tennis´s King, Novak Djokovic that becomes, with this victory, the first player to win 28 Masters 1000 titles, surpassing the stratospheric mark of 27 which holds Rafael Nadal. Most titles Masters 1000

The data are so overwhelming as the domain the Serbian exerts on the circuit. And endless, there are many records the Serbian is destroying in his path. Since 2011, the undisputed number one world has won 23 of the 47 Masters 1000 that have been played, almost half of the total, winning, in that period, almost 80% of the finals he has played (23 of 29). A surreal and unthinkable data a few years ago. We link here some of the most oustanding registers crushed for the serbian. Miami book of records Best titles/entries ratio Masters 1000 Best titles/entries ratio hard surface H2H Series Highest % Wins Highest % Masters 1000Wins highest % hard surface Finals streak Masters 1000

The Serbian´s career already occupies a place of honour in any classification. In Miami, Djokovic has scored his 63rd title, already surpassing the 62 of Guillermo Vilas, just one behind Bjorn Borg and Pete Sampras and three of Nadal. Also at Crandon Park Novak has reached 714 victories, overtaking Arthur Ashe and his own mentor, Boris Becker. Sampras and Nadal begin to appear in his crosshairs. Most titles Open Era

Regarding the current season, the data appear equally convincing. 4 titles, 28 victories and a single defeat, 9-0 against top-10, numbers which are on track to improve the supposedly insurmountable marks of 2015. Landmarks and impossible records are falling like dominoes at a frantic rate, as if it were the easiest thing in the world. Djokovic 2016 stats

But Laver lost 15 matches in 1969 (7 according to the ATP, but they do not collect in their results many important tournaments of those years). Connors could not extend his domain in 1975, losing the big finals he played. Borg failed in US Open, McEnroe could not maintain the same level in 1985 and Roger Federer could never beat Nadal on clay. But the main differential fact is they all had competition. They never duplicated in points to his immediate rivals and there was always someone ready to storm the champion´s throne.

But now we are in a different situation. The problem is not Djokovic win absolutely everything he plays. The point is he does so without opposition. The Serb just has lost 8 games in the two finals at Indian Wells and Miami and the impression given is that he has not needed to dig deep, except in very specific moments. No one seems able to stop him and if he follows this rhythm he could be virtual number one in 2016 before playing Roland Garros. Incredible.

The truth is that the circuit has entered a stage where emotion and uncertainty – essential components in any sports competition – are conspicuous by their absence and at this juncture the circuit runs the risk of being buried in the boredom of an imperturbable monotony. In 2011 and 2012 Djokovic was also number one undisputed, but Nadal, Federer or Murray were able to get him in serious difficulties. Today seems unrealistic to dream with finals as US Open 2011 and Australia 2012 against Nadal, US Open 2012 before Murray or 2014 Wimbledon against Federer.

Something has to happen to revitalize the circuit, because at this rate will have to be play-offs for players who appear by the side of Novak at bracket and thus they may have options to at least reach the final. It is to be hoped that in the clay season that begins now, Djokovic encounters more resistance which he has found to date.

Moreover, the tournament was a disaster for the rest of favourites. Federer could not face Juan Martin del Potro, victim of a virus. Nadal was defeated by the extreme climatic conditions of Key Biscayne and Murray and Wawrinka were far from their best moment. So the seeded 2, 3, 4 and 5 were out of the tournament before the round of 16, something which has not happened since Miami 2005. Miami 2005 draw

The positive side of the tournament was the modest this time smiled. Horacio Zeballos – who could not overcome the qualification he goes into in extremis to cover the loss of Federer – he reached for first time in his career the round of 16 in a Masters 1000. The Bosnian Damir Dzumhur who had never won a match at Masters 1000, got three consecutive victories. The same as Andrey Kuznetsov who also defeated Wawrinka, his first victory before a top-5.

Highlighted Kei Nishikori, winner of which was maybe the best match of the tournament, against Gael Monfils, where he had to save 5 match points, David Goffin, who reached his second consecutive semifinal, Nick Kyrgios who ousted Milos Raonic to stand up for first time in a Masters 1000 semifinal and Dominic Thiem who disposed 15 break points against Djokovic – converted only one – and he was, along with Goffin, who caused the biggest troubles on the number one.

The clay season begins and fans expect to enjoy of real battles. Nadal, Murray, Wawrinka, Federer, Ferrer, Thiem and company have the mission of prevent the Serbian´s monologue continues uninterrupted. They can win or not – after all what is desirable is the best player win – but they should try to return the spectacle and excitement to the courts, failing which the only thing that moves in tennis are the record books. 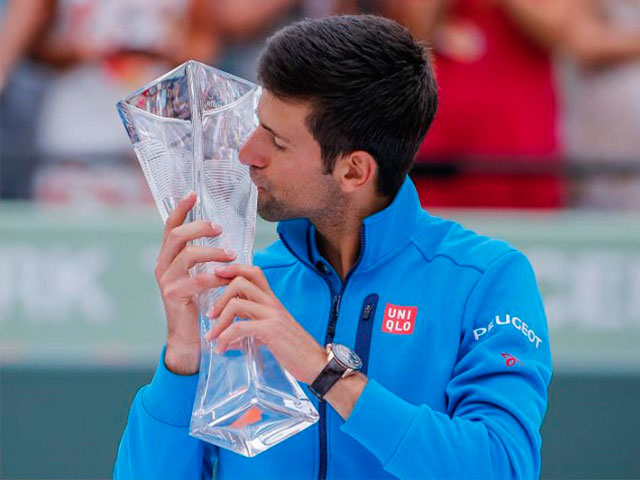